“What could be more mysterious than a work of music?” writes US jazz critic Ted Gioia. “When the aliens arrive from their distant galaxy, they won’t have much trouble understanding our food, sex and politics – those all make perfect sense. But they will scratch their green scaly heads at why people plug music into their ears or get up and dance when the band starts to play. ‘Captain, we are unable to decipher the messages hidden in these three-minute bursts of sound and the earthlings refuse to give us the code.’ (…) And jazz performance may puzzle them most of all. What could be stranger than a band playing the identical song, night after night, but making it sound different each time?” (https://www.amazon.com/How-Listen-Jazz-Ted-Gioia/dp/0465060897 )

Gioia has it right, of course. The shock of jazz’s new happens in process, in the moment, in the playing, whatever the repertoire and players. That often makes it hard for music writers – constantly pressured for news only of fads and ephemera to keep their platform ahead of FOMO – to place stories about a collection of known players working brilliantly in a known format.

Which may explain why the second, double-album release from Marcus Wyatt’s ZAR Jazz Orchestra, Into Dust/Waltz for Jozi (https://store.cdbaby.com/cd/marcuswyattthezarjazzorchestra ), released back in July, has barely been mentioned by most South African media, while the same outfit’s “Battle of the Bands” with the Jazz at Lincoln Centre Orchestra at Joy of Jazz last weekend has been name-checked almost everywhere. (It was not any kind of ‘battle’: that’s a zero-sum game, which good music never is. Two very different bands simply alternated. Unsurprisingly, each sounded different from the other. But, hey, novelty!)

So let’s start with a declaration. The ZAR Jazz Orchestra does, across two CDs, pretty well what you’d expect from 20 skilled and experienced jazz players using the conventional array of instruments and working in a live club setting. (The album was recorded at the Orbit). Of the 11 tracks, a handful have already been heard on Wyatt’s earlier albums while one, Feya Faku’s Peddie’s Place, is a much-played part of that latter hornman’s repertoire. 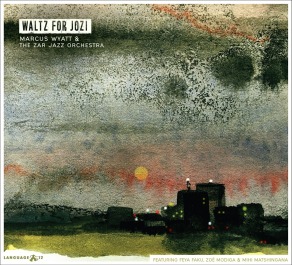 Nothing to see here, then: move along, please. Except that new things hit you …oh, about every couple of minutes.

First, Wyatt doesn’t run his big-band like a regiment. You’ll hear the expected gorgeous textural contrasts of massed instruments against solo sounds – but there’s no predictable order for who solos when, or which sections’ sound is foregrounded. Rather it’s whose voice and spirit suits which number, and so we have the lyricism of Bokani Dyer on the opener, Connected; Sydney Mavundla’s horn rather than Wyatt’s on Klipdrift Cinderella, and reedman Linda Sikhakhane bringing his fire to Peddie’s Place. (Sikhakhane is also a surprise in his own right, because, studying overseas, he’s recently been heard far too rarely on South African albums.)

Second, numbers initially recorded with smaller ensembles sound completely different using all the colours a big-band puts at the arranger’s disposal. The dynamics of Into Dust, for example, in its first outing on the 2013 One Life in the Sun create a lean, sinewy camel-race of a sound, with Domenic Egli’s clattering drums way out front. On the ZAR recording, by contrast, the number becomes a travelling conversation between drum and horns towards a more mysterious end-point .

That’s one aspect of the important work ZAR is doing: affirming and building the South African standard repertoire. New tunes enter the canon when a big-band arrangement demonstrates their robustness – Wyatt’s own Mali is probably a strong contender here. More established numbers, such as Peddie’s Place, have their position in the canon strengthened every time they are made to sound fresh again in a new context.

No big-band can survive without something perfectly imperfect going on between bass and drums, and the teamwork of Romy Brauteseth and Marlon Witbooi more than fills the bill. It’s hard to explain: you don’t want drum and bass marching in perfect lock-step – that takes us back to big-band as regiment again. What you need is a minute, perfectly-judged tension between the rhythm patterns of the two instruments. Brauteseth and Witbooi create that and never lose it. Your ears might not detect it under the volume of other instrumental sounds, but it’s that springy musical tension that holds the whole shebang together and moves it along. Getting that so superbly right makes Into Dust/Waltz for Jozi an energetic and energising listen, despite its coming from 20 players largely sitting down.

I’m still in awe of Wyatt’s ability as leader to hold such an expensive, unwieldy beast as a big-band together, and even marshal the resources to record it – twice, now. I also hope he doesn’t desert the smaller formats, because, as this release demonstrates, those more spontaneous outfits can be where great new tunes and ideas are first born. But Into Dust, like its ZAR Jazz Orchestra predecessor, has to be a strong contender for the next SAMA, for delivering exactly what admirers of jazz big bands hope for.

One thought on “Marcus Wyatt’s ZAR Jazz Orchestra Into Dust: situation normal, all fired up”