Second albums can be difficult. They’re probably most difficult for successful pop music artists, who may find themselves trapped by fan or label expectations into mining an increasingly stale vein of what had been fresh the first time around. But it can happen to jazz outfits too: incessant demands for more of the same often chained reedman Khaya Mahlangu when he was with Sakhile. (Now, older and less in the public eye, but unencumbered by those expectations, he astounds on every outing and it’s always fresh.)

Guitarist Reza Khota and his Quartet established no such rigid confines on his first album, the 2013 Transmutation https://rezakhota.bandcamp.com/releases . The playlist ranged from his own and bassist Shane Cooper’s compositions to explorations of Hungarian classical composer Bela Bartok, and fellow guitarists John Mclaughlin and Jimi Hendrix.

Five years on, and the same team – Khota, Cooper, reedman Buddy Wells and drummer Jonno Sweetman – has produced something completely different. “If a musician is thinking about selling music as an imperative to their aesthetic choices, or trying to appease the market-driven decisions of record companies, then they’re already off to a bad start,” says the guitarist. “The way people package and present their music is only limited by their imaginations.”

On the new album, Liminal, just out, https://open.spotify.com/album/7wEAimhWzjpPkculgOHxzR , those imaginations cross a lot of thresholds. We hear respectful allusions to musical cross-currents from across the world: India, Brazil, Nigeria, Mali, Ethiopia – and here. The intricate polyphonies and alternative scales of composer Mulatu Astatke infuse the track Yekatit https://soundcloud.com/shanecoopermusic/reza-khota-quartet-yekatit-live-bootleg-at-blah-blah-bar-14-dec-2016 ; a samba feel opens the Ghosts suite; compelling Afrobeat patterns underpin Unearth. It’s absolutely not ‘World Music’ in the appropriative marketing sense, but definitely world music in Karl Marx’s sense: “The worker has no country.” 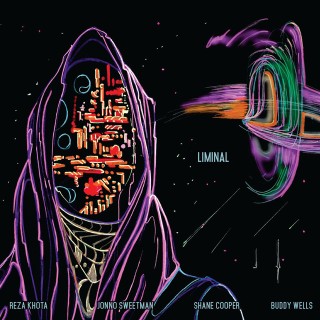 That’s the first echo of the title in the sounds, and Marx is the right source for a reference. Because those tracks and the others deliberately allude to the politics of the exploitative world we inhabit. Khota doesn’t set out mechanically to compose “songs about…” Rather, he aims to draw out the “sensibility brewing in the sounds”: what has sensitised him as he travels, works, observes and reflects.

That’s where the second echo comes in. Because his travels and observations have been making him think about how the majority of oppressed and excluded people exist on the margins of the world their labour fuels. The armies of early morning workers, travelling through the Delhi Haze; the Nigerians who cannot benefit from the oil they Unearth; the miners of Marikana, the injustices of whose lives and deaths live on as Ghosts*. But their liminality has a positive face too, because they also stand on the threshold of the new world they have the power to make.

And there the politics and the improvisation intersect. Liminal’s intelligent sleeve-notes, by Ben Verghese, quote poet-scholar Fred Moten on improvisation (Come On, Get It!): https://thenewinquiry.com/come_on_get_it/

“all inseparably inside out and unexternalisable, all/ and more and none and gone, come on.”

Which is about as close as you can get to describing what improvisation does, as opposed to how it sounds. It’s there, and it’s passed. It won’t ever sound the same again (beware of players who can repeat a so-called ‘improvised’ solo on demand). And, like the oppressed and excluded, it’s always on the threshold of a new (sonic) world. Liminal.

A third resonance between title and sounds is in the album’s easy, unselfconscious genre-crossing (much of which has evolved from the decade-long partnership between Khota and electronic producer Cooper) where electronic grooves unfurl shoulder-to-shoulder with classic jazz phrases. Rigid genre boundaries, Khota suggests, have done no favours to the intellectual legacy of African music: “We are no longer content to have our own musical legacies shoved into Ethnomusicology. Music degrees have been severely impeded by the notion that what’s good is only out there beyond our shores and the only way to study our own music is as a kind of anthropological artefact. For the longest time, our universities placed African music in the category of ‘Light Music’ , to be distinguished from ‘Art Music’, which was reserved for the European classical tradition. This distinction has no place in music education. All those attempting to maintain this hegemony are on their way out.”

It certainly finds no place on Liminal. It is a combination of all the elements that creates such intense, absorbing and compelling music. A musical discourse that engages with the world engages with all of it: not the serious discourse of exploitation alone, but also celebration and the euphoria of working together. That kind of endeavour, says Khota, reminds us other lives and other worlds are possible.

As well as drawing on many lineages and genres, the music draws equally on all the players, and richness from the places where they meet, overlap and part company: the kind of liminality found in the permeable boundaries between individuals when they are creating collectively.

Khota draws attention to Wells’s solo on Delhi Haze as “one of my favourite parts of the album ”, to Cooper’s “cool arpeggio bass pattern” on Lost is a Place, and to Sweetman’s “ability to drive the energy of the band” on Diamond Mind, and the way he “provides the narrative backbone” throughout. If you want to know who these musicians are, Khota suggests, listen carefully to those elements.

Khota doesn’t stand still. He’s currently Artist-in-Residence at UWC’s Centre for Humanities Research and has begun studies towards a PhD. The travels will continue, with journeys with Mandla Mlangeni’s Tune Recreation Committee to Zanzibar, Reunion and other SADC counties. He’ll also be touring with saxophonist Abraham Mennen, also soon to launch a new album. The Quartet will appear – with material from Liminal and probably some new things too – at the 2019 Cape Town International Jazz Festival

* Khota’s more detailed thoughts about his Ghosts suite invoking Marikana will appear soon in an interview at  https://www.newframe.com/marikana-inspires-creative-resistance