This one’s for Human Rights Day. Every time I write about transforming or decolonising some aspect of the jazz establishment, somebody somewhere feels obliged to inform me either that “Without colonialism nobody would be playing instruments like pianos”, or, rather more inexplicably, that “Actually the first jazz record was made by white men: the Original Dixieland Jass Band cut Livery Stable Blues in 1917.” That second fact is so well known as not to require repetition. Why it is used to refute decolonisation arguments is puzzling, when it might equally well be used to argue that while the creativity of African-Americans developed the art form, it was white Americans who commodified and exploited it.

Damon J Phillips, in his intriguing, rigorous historical study of cultural production in jazz, Shaping Jazz (https://www.amazon.com/Shaping-Jazz-Cities-Labels-Emergence/dp/0691150885 ) , provides ample evidence about the role of dominant financial elites in the music’s early days. Anyway, the real story is actually more complex than that – because the first contract to make a jazz recording was actually offered to trumpeter Freddie Keppard: a man of colour (http://www.nola.com/entertainment/index.ssf/2017/03/first_jazz_record.html ). He turned it down.

The first argument – “What about the piano?” – might now be rechristened the Zille Argument, since it’s essentially the same somewhat off-key melody the DA veteran was singing last week with her talk of piped water and infrastructure as fruits of colonialism, and it’s the updated cover version of an old, hackneyed, deeply colonialist, “ungrateful natives” song.

The title of this blog was borrowed with thanks from the most recent scholar to discredit that distasteful refrain: Shashi Tharoor, whose book Inglorious Empire was published earlier this year (https://www.theguardian.com/world/2017/mar/08/india-britain-empire-railways-myths-gifts ). Though he’s writing about India, his points all hit home here too: colonialism distorted the sense of identity, politics, economic development and initiative of colonised nations, systematically stifling or eliminating local enterprise, applying divide-and-rule policies and re-shaping cultures and institutions in the image of patriarchal Britain – and more. Great cities (with piped water – as in Gedi, in what is now Eastern Kenya), trading empires, fearless explorers (think Ibn Battuta) and even factories existed in various parts of the colonised world before the Europeans arrived (as, of course, did a rich, diverse and complex range of musical instruments).

What happened subsequently has a name – underdevelopment. Wherever the colonisers arrived, indigenous development that was everywhere already in process was forced backwards. The best general introduction to this topic is West Indian scholar Walter Rodney’s How Europe Underdeveloped Africa (https://www.amazon.co.uk/Europe-Underdeveloped-Africa-Walter-Rodney/dp/190638794X ) but that’s the tip of a huge iceberg of distinguished scholarship from writers such as Professor Ann Seidman (institutional underdevelopment and how it can be reclaimed), Dr Joseph Hanlon (Southern African economies), Professor Robert Sutcliffe (Latin America) and many more. 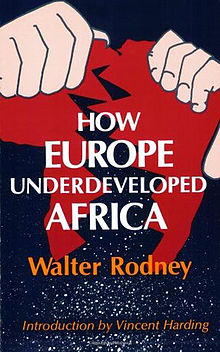 How the Zilles of this world (often ostensibly well educated people) can have remained so ignorant of all this scholarship for so long surprises me.

How they can be so insensitive as to equate water-pipes (often initially installed to stop cholera reaching the rich, white parts of town) with oppression, dispossession and cultural – and literal – genocide is even more astonishing. Dismissing and diminishing the pain of others as either over-emotional or insignificant ‘in the balance of things’ has long been one of the ways colonisers justify colonialism. However, those who suffered it, own it.  As Irish anti-colonialist James Conolly pointed out long ago, there are “none so well equipped [as those who wear them] to decide what is a fetter.”

We’ll be discussing decolonisation in relation to the jazz curriculum next week at the Arts Journalism Public Debate, which every year forms part of the Cape Town International Jazz Festival. The debate will take place at the Artscape Opera Bar at 13:45 on Wednesday March 29th. Among the panellists will be pianist Kyle Shepherd, and media scholar Asanda Ngoasheng

A former Clive Menell Scholar at Duke University, Ngoasheng currently lectures at the Cape Penininsula University of Technology and is undertaking Doctoral research on Decolonising Pedagogy After Rhodes Must Fall. More names will be announced. Entry to the public debate is free, but the room fills up fast so arrive early.

One thought on ““But what about the piano?” The Zille Argument and decolonising the jazz curriculum Part 3”