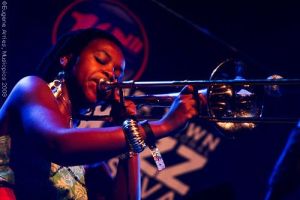 Trombonist/singer/composer Siya Makuzeni’s award as Standard Bank Young Artist for Jazz is long overdue. Her acceptance video (www.youtube.com/watch?v=G5m89Y5IVAM ) is graceful and understated. Many of the rest of us are simply asking: “what took so long?”

Outside jazz, there are many artists whose star quality rests on a (sometimes carefully crafted) brand image. Inside the genre, it’s the skill of the notes you play, and the mind which shapes them, that count. For years now, Makuzeni’s stage appearances have been met with welcoming applause when she begins – and with oh-my-god-how-did-she-DO-that? rapture when she ends.

Here’s how Lloyd Gedye described her performance at the Grahamstown Festival this year in TheCon (http://www.theconmag.co.za/2015/07/07/grahamstown-shows-its-jazz-hands/ ): 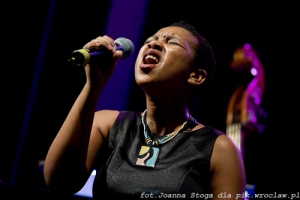 “Makuzeni used various digital manipulation techniques to contort her voice into all kinds of shapes, as the band followed her lead. Rock, jazz, gospel, hip-hop, soul, and even drum and bass coalesced, often within the same piece, as the band gave life to Makuzeni’s visions. The highlight however was a performance of the Marcus Wyatt tune Jessica from his album Gathering, where Makuzeni’s voice became a husky hazy dream as she poured everything she had into the gentle ballad.”

Makuzeni began her trombone journey at Stirling High School, coming from a home where her mother was a choir conductor and her father had a taste for rock. She started with the Standard Bank National Youth Jazz initiative in 1998, and later studied music and drama at Rhodes and on the jazz programme of the then Pretoria Technikon (now TUT). She’s been in line-ups for the late Zim Ngqawana, McCoy Mrubata, Feya Faku, Kaya Mahlangu, Themba Mkhize (with the SWR Big Band) and more, featured at international jazz festivals and contributed to Franco Brogi Taviani’s soundtrack for the Italian movie Forse Dio è Malato.

Let’s start where Gedye did, with the voice. Like vocal improvisers such as Maggie Nicholls, Makuzeni, who started her musical life as an instrumentalist (on recorder, at 11) plays with all the colours and sounds her vocal chords can create, plus the ones the digital box can add. Though she can sound startlingly beautiful on a ballad, she can also be harsh, guttural, angry, hectoring, sonorous – whatever the context demands. As she says of her role in Language 12, she’s not just “delivering the melody with my voice, but creating soundscapes, playing with the rhythms, using electronics [the pedal] … even the rap thing.”

Diverse working contexts have extended that range: from accomplished but conventional singer in the band, to a source of interstellar sounds with Carlo Mombelli’s Prisoners of Strange (www.youtube.com/watch?v=or1jdr9aJ88 ), co-conspirator with Marcus Wyatt in numerous formations from Language 12 (www.youtube.com/watch?v=P2k1nvDE63E ) to the current Bombshelter Beast, and master of improvisation on the edges of a dozen genres in IppyFuze (http://sidewalktv.com/2015/09/29/cue-this-ippyfuze/ ) That’s before you add in her flair for Xhosa poetry: yet another set of sounds on the palette.

Makuzeni’s trombone is equally accomplished. She can swing with aplomb in a big band context (www.youtube.com/watch?v=G5m89Y5IVAM ) as well as grunt, growl and bellow on the instrument when Language 12 demands it. She writes or co-writes much of her own material, and leads Ippy Fuze. Apart from Ippy’s EP, however, she has no albums under her own name yet. As Nduduzo Makhathini, this year’s SBYA has ably demonstrated, the award should provide support and space to change that.

Women on the Standard Bank Young Artist jazz list have been rare (3 including Makuzeni since 2006) and women instrumentalists even rarer (the last was saxophonist Shannon Mowday in 2007). Makuzeni is there this year not because of her gender, but because she is a superb all-round musician. And yet the issue remains significant, because if women instrumentalists do not take the award more often, Standard Bank is sending a very negative message to all female jazz players, and especially the youngest.

Think about e-TV’s (self-proclaimed) “coveted Play of the Week award”. Since a well-known whisky took over sponsorship, the award announcement is bookended by the exhortation to “Give that man a Bells”. So, during this sponsorship, nobody from Banyana Banyana or the women’s hockey, swimming, athletics or any other female squad is taking that baby home? It may not be intended, but the exclusionary implication is clear.

What we see and hear most frequently, we think of as ‘natural’, whether that is actually the case or not. For most media commentators on the Standard Bank Young Artist awards during the past decade, gender has been invisible. Male talent and leadership have been naturalized. We could begin transforming stereotypes about what kind of jazz leadership is ‘natural’ by simply giving the award next – on grounds of ability alone – to pianist Thandi Ntuli in 2017, bassist Romy Brauteseth in 2018, and in 2019…

One thought on “Siya Makuzeni: a Standard Bank Young Artist for Jazz we’ve all been waiting for”